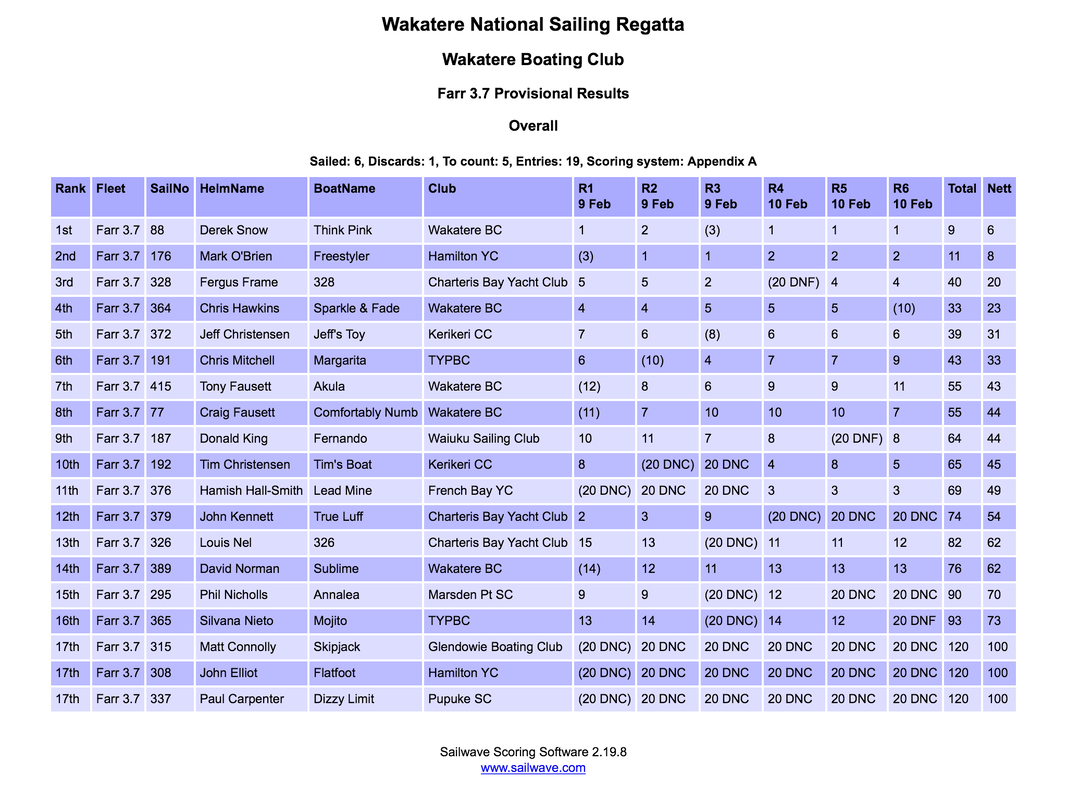 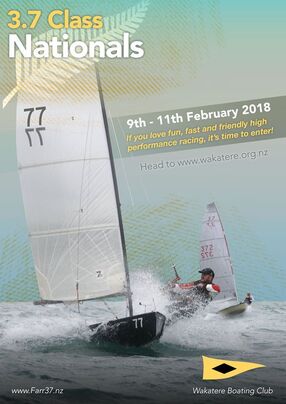 ​The 2018 contest was held at the Wakatere Boating Club along with contests for another three classes. The standard of the event and the combination with the other classes was outstanding. The Class offered sincere thanks to Wakatere volunteers at the prize-giving / closing.

The weather conditionsplayed a part in the series with a mixture of all different wind and wave conditions.  This provided a true test as each race was different with a noticeable build in wind strength and waves during each day that required sailors to adapt and ‘change gear’.

Derek Snow (Wakatere) and Mark O’Brien (Hamilton) raced pretty much toe to toe with Mark having the edge in windier races and Derek having the edge in lighter races, but both very close regardless. Fergus Frame (Charteris Bay) was right there with them as was Chris Hawkins (Wakatere). These four sailors were consistently fast.

The 2017 Champion, John Kennett got off to a good start recording a second in the first race. However, he was unlucky to break his rudder blade launching at start of the second day. 2016 Champion Hamish Hall-Smith missed the first day of racing but showed his skill on the second day recording three thirds in a borrowed boat.

The series was decided over six races.  The third and final day of racing was abandoned partway through the first race of the day, due to zero visibility in very heavy rain. A shame because the sailing was epic and the closeness of all the racing was exciting.
The final outcome illustrated that age is no barrier with Derek winning the contest overall while also in the Grand Veteran age bracket followed by Mark O’Brien in Open and 3rd Fergus Frame winning the Under 21 Trophy.  Chris Hawkins, also a Grand Veteran, was fourth on handicap and fourth overall.  Age groups were evenly spread through results.

Craig Fausett was first on handicap, just ahead of his brother Tony Fausett. Donald King won can of the contest for capsizing at the top mark and becoming completely entangled with it. But he also won the Kennett Cup for top sailor of the Silver Fleet.
As an author of this comprehensive epistle, I would like to point out that I’ve come 6th for two years in a row. It is entirely possible this marks the peak of my sailing career and it is all downhill from here.  On the other hand the performance of Derek Snow to win the National championship (again) as a Grand Veteran (again) is very encouraging for old craggy people everywhere.  They are not the easiest of boats to sail, they teach you how to ease the sheet and how to wire on a reach, the satisfaction of blasting along upwind or downwind is enormous. The top sailors are all generous with their advice and encouragement, and it certainly increases everyone’s enjoyment when the boats are in the groove.

In the entry list there were 7 sailors who were previously national champion, many of them multiple times. Clearly this is a class that gets in your blood. The list of entries was quite small this year with only 19. It was reasonable to expect many more, but the weather forecasts prior to the event were dire and as it turned out, it was not that bad.

Ownership of yachts is tightly held, there are 150 active race boats on the class register; there are currently five race boats for sale nationally, and progress continues on plugs and moulds for a professional production run of new composite yachts to boost the fleet. As well as this the number of yachts in the UK continues to grow with sail number 432 recently issued. In New Zealand there are now as many yachts being actively raced in the South Island as there are in the North and this is very good news for a truly national class even if it does slightly impact on attendance at national contests.
​
Chris Mitchell, Mark O’Brien, John Elliott.